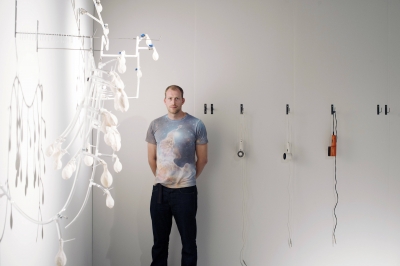 Tom Foulsham, born 1981,  graduated from the Royal College of Art with an MA in Design Products (2009), studied Architecture at the Bartlett, UCL (graduating in 2004), and worked in the practices of Thomas Heatherwick and Ron Arad. His one-off work installations have been included in the exhibition ‘In Praise of Shadows’ at the V&A (2009), a solo show at Minnie Weisz Studio, London (2010), and a solo show at the Marsden Woo Gallery Project Space (2011). He was commissioned to animate the furniture in an exhibition of works by Ron Arad, entitled 'Restless' (2010), at the Barbican Art Gallery, and collaborated with Laurie Anderson on a piece for the show ‘Laurie Anderson, Trisha Brown, Gordon Matta Clark: Pioneers of the Downtown Scene, New York 1970s’, also at the Barbican (2011).