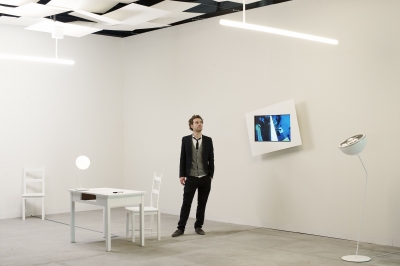 Markus Kayser was born near Hannover, Germany in 1983. He studied ‘3D Furniture and Product Design’ at London Metropolitan University from 2004-2008 and continued 2009 with the study of ‘Product Design’ at the Royal College of Art, where he gained his Master in Arts and Design in 2011. Markus Kayser Studio was founded 2011, with a presence in Germany and London/UK.

From early works of furniture and lights Markus Kayser developed an understanding of technologies, which he sees as being key in combination with the natural given. He likes objects that one can relate to, that speak about something else other than just their utilitarian qualities. The layers to be discovered as well as one’s associations with objects interest him. Experimentation plays a big part in developing his designs. Each project requires a different angle and in finding that conceptual as well as material experiments follow. Markus Kayser’s recent work shows the exploration of hybrid solutions, linking technology and natural energy to evaluate opportunities and to question current methodologies in manufacturing by testing new scenarios of production. In his process it is important that behind the theory there must be a realistic proof of concept, which demonstrates the real potential. In his work he tries to tell a story and to balance the seriousness with a sense of humour. This kind of storytelling makes his products as well as his experimental works digestible without losing their depths in content. The aim of the newly formed Markus Kayser Studio is to engage in discussion about opportunities in the production of design involving new as well as forgotten technologies.