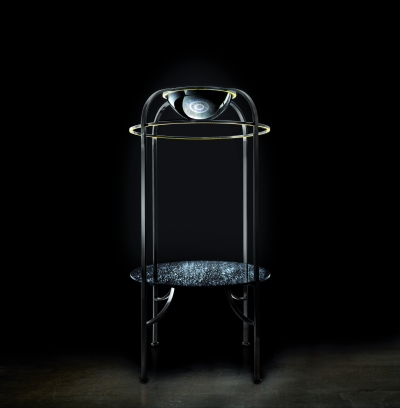 A generation of craftsmen and artists has joined an ambitious challenge and creative adventure instigated by Armel Soyer.

Supported by a classical design concept, Armel Soyer Editions has adopted a global and contemporary approach to resurrect forgotten craftsmanship. Recognized or emerging talents are united in a common search for inspiration, quality, rarity and excellence. Armel Soyer proposes to re-harmonize contemporary design with the arts and crafts, reinjecting ornamentation, detail, the richness of natural materials and adding poetry to contemporary design along the lines of the most outstanding achievements in the history of decorative arts. Her ambition is to recreate a dialogue between the art object and its environment, like a twenty-first century period room. Her objective is also to reintroduce one-off decors to accompany specific projects.

The designer, Pierre Gonalons, chose space and light for his PAVILLONS. With a precise gesture, he defines two micro-architectural structures animated by curves and counter-curves. A delicate golden light underlines the structure and apparent lightness of the work. These domestic conveniences, whose verticality is punctuated by a dome, bring rhythm to an intimate space, while offering service and functionality. Simplicity and beauty are the values behind this project. The pieces succeed in creating a meeting point between the area symbolizing the sky and the architectural structure of a table or a library.

Pierre Gonalons creates an enclosure that encourages contemplation. PAVILLONS develop the art of the paradox, wavering between the precious and refined and a certain vision for what is human in the universe. He invites us to share in a scenario that is both innovative and refined.